It's True! Iron Maiden heading to South Africa! (+ Slipknot and AC/DC rumoured to be here as well) 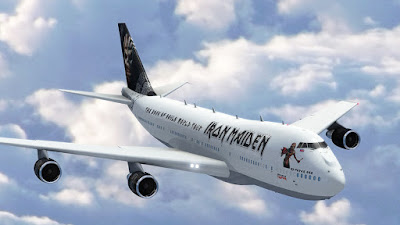 Rockers of South Africa, unite! Legendary rocker band Iron Maiden is heading to South Africa in 2016 as part of their The Book of Souls tour, which is also the title of their brand new album set for release on 4 September. Vocalist Bruce Dickinson will captain and pilot a Boeing 747-400 jumbo jet to play six of the seven continents. South Africa, China and El Salvador is the countries the band will play for the first time. Final dates, venues and ticket on sale times, along with full details of what Maiden fans can expect from The Book Of Souls World Tour, will be announced by territory starting in a few weeks’ time. As usual, where feasible, IRON MAIDEN Fan Club members will have exclusive access to purchase tickets before they go on general sale. Also, wherever possible, the Fan Club will again be running the First To The Barrier draw for privileged, early access to the venue to secure the best standing positions by or close to the barrier.
* So rumours has been rife that AC/DC and Slipknot is coming to South Africa next year, and now it seems there are truth in these rumours! I will keep you posted. Seems like 2016 is going be one fucking rocking year in South Africa!
AC/DC IRON MAIDEN Slipknot