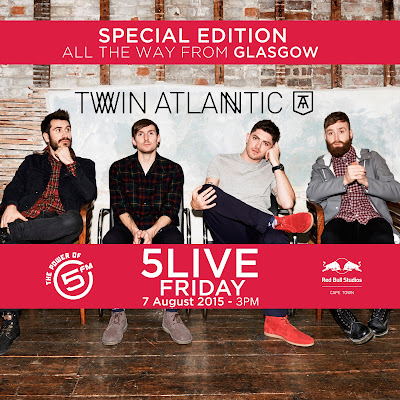 As a warm up to their shows at Shimmy Beach Club Cape Town and at Oppikoppi -The Fantastic Mr. VosVos, Twin Atlantic will visit Red Bull Studios, Cape Town to perform on 5Live on Friday 7 August. 5fm listeners will be familiar with Twin Atlantic`s catchy singles that have been playing on 5fm since August 2014: “Brothers and Sisters”, “Heart and Soul” and “Hold on” (from album Great Divide – Red Bull Records.) Twin Atlantic has had a busy year up to date, including an extensive tour in UK. They have been performing to full houses and have received rave reviews following the success of their latest album release Great Divide (Red Bull Records, August 2014.) Q magazine said of the album: “Scottish next big things step it up with an arena-rock-sized swagger” and Kerrang! commented: “If their ascent over the past years has shown us anything, they’ll soon be plunging their flag into the summit of British rock.” McTrusty says that the band is looking forward to their time in South Africa. “It's going to be a trip of a lifetime for us and something we never realized we could achieve with this band. We have been playing major festivals in the UK, North America, Europe and Australia so it's with big smiles and pride that we can now say we have been to a whole new continent and rocked with people so far from home. See you soon!”” Since the release of Great Divide the album has produced three hit singles “Heart and Soul”; “Brothers and Sister” and “Hold On.” The fourth single off the album “Fall into the Party” was released to SA Radio stations in June 2015. McTrusty says of the making of the video:"We worked with our friend Paul Bugler over the whole build up, release and live shows from “Great Divide” capturing a life-changing 18 months for us personally and as a band. We always view new music as progress. Getting to express ourselves. Travelling. Meeting new people who become inspirations and friends. This video is a compilation that is just the tip of the iceberg. We feel like we have only just scratched the surface. It's been a pleasure to bring this song to life and through that have such a literal visual representation of what the song stands for. Enjoy!” The bulk of Great Divide was recorded in Rockfield in Wales with producer Gil Norton (Foo Fighters, Pixies), who also helmed Free. Additional songs were recorded in the States with Jacknife Lee (Snow Patrol, U2, R.E.M.). Twin Atlantic formed in 2007 when McTrusty and bassist Ross McNae, a friend from school, joined forces with drummer Craig Kneale and lead guitarist and occasional cello player Barry McKenna.  All four had been in previous bands on the Glasgow scene. They bonded over a shared love of alternative rock, punk-pop and the city’s skate and street art scene, as well as a determination to make music their day jobs. Their ferocious shows soon saw them booked to support Smashing Pumpkins, Biffy Clyro and their teen idols Blink 182. Within two years, they had played most major UK festivals and been signed, following a tip-off from Alan McGee, to American label Red Bull Records.
5FM Oppikoppi Shimmy Beach Club Twin Atlantic