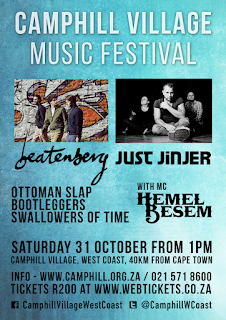 The annual Camphill Village Festival is going to be one hell of a party! With MC Hemelbesem and a line up which includes some of South Africa`s finest musicians. Just Jinjer fans will be happy to hear that they will be performing some brand new songs from their new forthcoming album during their set. Hemelbesem will bring his fine tuned humor and hip hop tunes, while Beatenberg will rock the crowd with their popular hits. Ottoman Slap will add an exotic flair to the festival with their Middle Eastern and Balkan music and fantastical costumes. Add to that Bootleggers` musical mojo and Swallowers of Time`s blues-rock vibes and the Camphill Village Music Festival 2015 is set to be an experience of absolute musical delight. Vision Music works with talented artists from Atlantis and the following artists from their label will also perform at this year`s festival: rappers Che-V and SillyBoi, pop and R&B singer TashnaB and pop artist Ceejay. 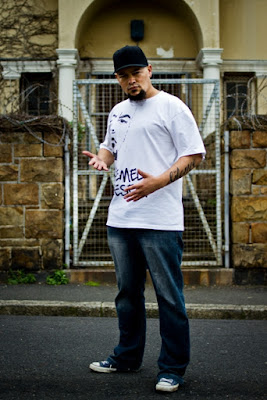 Hemelbesem, known for his awesome hip-hop music and well-know TV personality and Pasella presenter spoke to THE BEAT about this gig, that he might be a vampire and that tattoo.

Camphill Village Music Festival is happening end of October, why did you want to get involved with this? Well if an invitation has the words 'music' and 'festival' in it, then it can be hard to say no. Plus a big bonus...is to share a stage with awesome bands.

Although you're only the MC, is there a slim chance we might here you perform some of your hip-hop songs? I'm a hip hopper, so i gotta squeeze in something in...you know the deal!

You wear many hats (doing a lot of things), which one is the closest to your heart? Everything I do comes from the same root..so it's kinda difficult to isolate anything. I teach, perform and learn with the same passion and drive.

How did you start of in hip-hop? I was predominantly an English emcee but after I got involved in the whole edutainment thing that defines me today it all went the Afrikaans route coz of the demographic I speak to.

What does the future look like for local hip-hop? The future for especially english and motswako is now...look at the likes of AKA and HHP for instance..but for Afrikaans it is indeed bright. It's been bubbling under for long now, but its slowly getting the recognition it deserves.

You're also involved with the 'Liedjieslypskool', can you tell us a bit more of this? Liedjieslypskool is an initiative of ATKV. I work with the esteemed likes of Anna Davel, Pedro Kruger, Bouwer Bosch etc.. We basically go into areas in search of raw afrikaans talent, polish it and showcase it... purely because we believe Afrikaans has more to give than whats on commercial charts for instance. The fruit of our labour will soon be heard!

What is the one thing people don't know about you? I'm a vampire...haha I'm not sure 'cos my life is pretty much out there in the open..lemme think...I have a Bob Marly portrait tattooed on my ribcage

Why should people come to the Camphill Village Music Festival? The beauty of quality within quantity will be exhibited...plus ill teach you some proper street Afrikaans.
Beatenberg Camphill Village Festival Hemelbesem