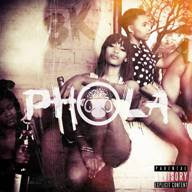 As SA hip-hop heats up, the movement keeps breeding great talent and BK is it’s stand-out gem, paving her own lane with the release of debut single, Phola! Not only does she have bars, a great voice but also a uniquely smooth cadence last heard on artists like Bahamadia and Doggy Style Snoop Dogg, Bk reps in a style that won’t easily be boxed and labelled as female rap, this one qualifies as just straight up dope hip-hop. According to BK her style is... “a mixture of kasi and street rap I suppose, some say I'm gangster...”  My style is influenced by BK is not new to the music scene, she’ recently collaborated with Reason, Tumi of Tumi And The Volume, DJ Shimza (yes she gets down with house music too!) and she gets lots of love with co-signs from DJ Vigilante (Cashtime Life Crew) who took to the artist after he heard her rendition of Anatii’s ‘The Saga’ and Drake x Niki Minaj’s Truffle Butter freestyle. BK also featured in this week’s MTV Base Cypher side Ginger Breadman and Ethikweni’s new kid on the block Raheem Kemet. So, what is this about again? BK’s new single... it doesn’t get cooler than this...“Phola is feel good joint about the thing we do on weekends - just chill... “ BK
BK Phola!