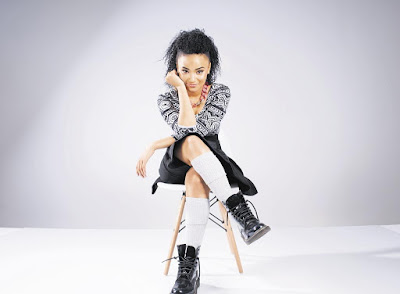 If you haven't heard of Tholwana Mohale, you should ask yourself, 'why?'. She is tearing up the music charts with her new single Hollywood Guy. So who is this local singer? Tholwana Mohale is a Grade 10 learner from Steinkopf, a small town in the Northern Cape. She was born into a family of five and her mom is a single parent. She started singing back in 2011, when her school offered guitar classes and she’s fallen in love with the craft ever since. 2014 was a breakthrough year for the young talent. She entered eTV’s SA’s Got Talent and was a clear frontrunner and fan favourite to win the competition right on the offset. Her performances left the crowds on their feet, but most notably so during the finals, where her rendition of Meghan Trainor’s “All About That Bass” resulted in a standing ovation. That night, she was crowned as the overall winner, taking home a cash prize and a recording contract with Sony Music Africa. This year has been a busy one for the 15-year-old, who has relocated to Johannesburg to continue her schooling and start recording music for her debut album due for release in 2016. Tholwana is currently a drama major at the NSA and while music is her primary focus, she also has future aspirations in the acting field. “Hollywood Guy”, her debut single, was released early in September. The track was produced by FutureKings (Ross Jack & Alex Parker) and is an early taste of what is to come. The single received national early airplay upon official release and also received positive feedback from fans and critics alike. “It was really exciting being in studio recording the single,” she says. “When I’m behind the mic, I feel like I can do anything. I felt incredibly free while recording this song in particular.” Tholwana’s philosophy in life is that all people should be given an opportunity to do what they love and enjoy and this is what she is hoping her music will inspire people to do. Watch this space for more from this amazing young talent – this is only the beginning!
Meghan Trainor Tholwana Mohale