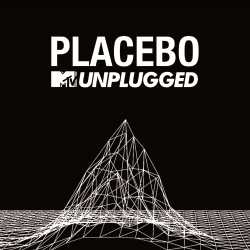 With their 20th anniversary inching ever closer, Placebo could well be forgiven for sitting back and taking stock. After all, with seven studio albums behind them (five of which have topped the German album charts), more than 12 million album sales, and monumental 18-month tours performed before millions of fan worldwide, what else were they supposed to do? The answer: reinvent themselves yet again, while revamping the iconic “MTV Unplugged” format in the process. When Placebo received the invite to appear on their own “MTV Unplugged” special, Molko recalls, “It wasn’t going to be enough to just sit at the piano and strip the songs down to their bare bones.” Olsdal adds: “Once we found out that we were going to play this show we were on a mission to make our contribution to the ‘MTV Unplugged’ story equally exciting for us and the audience.” Brilliant!
MTV Unplugged Placebo