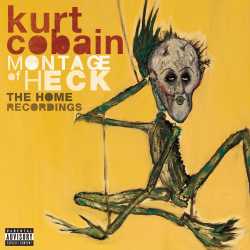 Hailed as one of the most innovative and intimate documentaries of all time, KURT COBAIN: MONTAGE OF HECK is the only fully authorised portrait of the famed music icon. Wildly creative and highly praised, the documentary follows Kurt from his earliest years in this visceral and detailed cinematic insight of an artist struggling to come to terms and make sense of his place in the world. Says Amazon, "The soundtrack is comprised from various early and raw cassette recordings made by Kurt alone, the soundtrack allows a rare, unfiltered glimpse into Cobain's creative progression from early song snippets and short demos to musical experiments and ultimately, pieces of songs or lyrics that eventually appeared on later Nirvana albums."
Kurt Cobain Kurt Cobain: Montage of Heck Nirvana