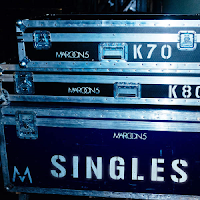 I'm a big fan of Maroon 5. I have all their CDs:  Songs About Jane (2002), It Won't Be Soon Before Long (2007), Hands All Over (2010), Overexposed (2012), V (2014), but I don't have singles. I don't want it. I don't like it. Harsh words from someone who is a fan of the band. I think the biggest reason for not liking this CD is the collection of songs and the lack of new, rare, demo and/or exclusive tracks. The CD is bland in comparison to other greatest hits CD' s out there. Sorry Santa, I don't want this in my Christmas stocking this year. Thank you.
Hands All Over It Won't Be Soon Before Long Maroon 5 Overexposed Songs About Jane V