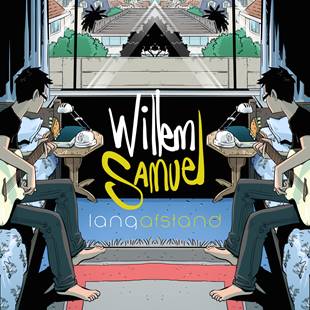 South African Illustrator, painter and musician, Willem Samuel, is currently in the country waiting to have is UK visa renewed. He stretches his stay to its fullest potential by releasing his collection of exquisite love songs, Langafstand (Long-Distance). Langafstand is accompanied by a beautiful booklet of illustrations and lyrics which features art from Willem's graphic novel Mengelmoes, which also launches this month, 25 February, at The Book Lounge in Cape Town!

Meet Willem Samuel. He’s a comic book artist, painter and songwriter currently based in London away from his native South Africa. After being in various punk and indie bands since the 90s, he has now debuted his first solo EP that is a reflection on being physically and/or emotionally away from a loved one that’s appropriately titled Langafstand (Afrikaans for Long-Distance). Langafstand is an EP with love songs written and sung in Afrikaans, yet the core emotions can still be felt universally. These acoustic tracks aren’t the typical ones sung at coffee shops, there are some experimental elements with electric guitars, cajons, and melodicas thrown in amongst other ambient instrumental voices. Willem’s musicianship can bring to mind a mix of Denison Witmer, Iron and Wine, and Bill Callahan albeit with a style on his own.

The EP starts out with the song “Mis Jou” (Miss You) which is a somber number about longing for that special someone. “Tweedimensional” (Two-Dimensional) is a slowly building song that uses a cajon as percussion midway through and the melody is anchored by a subtle bass line that keeps it going. “Die Voorstel” (The Proposal) is an urgent and upbeat track that details a proposal, finding mutual instruments, and wanting to start a family in that order with some synchronicity in those topics. The fast tempo has a bit of a folk punk edge that is reminiscent of Chuck Ragan’s solo work. There’s the slowcore ballad “Snare” (Strings) that is a gentle song that invokes imagery of comparing and contrasting a lover’s embrace being better than holding a prized well-strung guitar. “Waardevol” (Precious) has clean electric guitar lines interweaving with the acoustic dreamy sound in this piece. The last song “Sonskyn” (Sunshine) is a lo-fi downtempo song that evokes some of the aesthetics of Sun Kil Moon with a bit of American Wolf’s earlier material thrown in. It has an unpolished, yet truly honest aesthetic that is a fitting closer to Langafstand.

This multitalented artist is able to make the yearnings of being in that long-distance relationship seem a bit better after releasing his debut solo EP. The strength of these songs was enough to make this a solid entry in the folk genre for 2016.
Willem Samuel