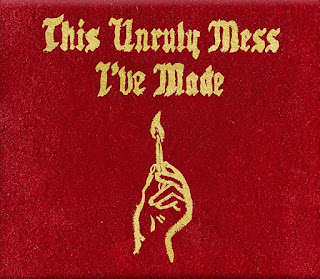 You sometimes you hear a song that only reaches deep into your soul after a while? A song that grips you, makes you understand and brings a smile to your face but also an understanding of things. It was with the 2012 CD Heist that it happened to me. I was watching Ellen DeGeneres and this band, Macklemore & Ryan Lewis, came on and sanh Same Love. I was hooked. I could not get the haunting chorus and the fast and furious rhymes out of my head. It was a beautiful song. It spoke to me. Not only because I am also a gay man, but also what the song means to the hip-hop and rap industry where being gay is sometimes frown upon. I started to keep a tab on the guys and when This Unruly Mess I've Made was released, honestly, it blew me away. Boom! Downtown  (featuring Eric Nally, Melle Mel, Kool Moe Dee, and Grandmaster Caz) and Dance Off (featuring Idris Elba and Anderson.Paak) gripped me by the balls. What two freakin' funky songs! The dudes does a mix of genres and they blend it perfectly together to create something so unique it can only be described as the perfect sound for a perfect album. Hauntingly beautiful song Kevin have a harsh reality check on overdosing on prescription drugs. That is why I like Macklemore & Ryan Lewis, they put real life events into their songs. Sing & rap about stuff that is real. Not sugar-coated, but real. In your face. Other hit picks would be White Privilege II, Need To Know and Bolo Tie.