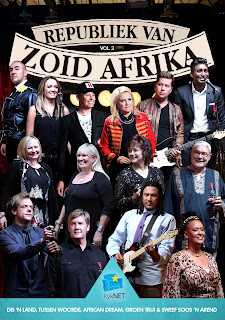 The Republiek van Zoid Afrika Volume 3 CD and DVD are now available in stores nationwide. The CD can also be downloaded from iTunes.

Every episode of Republiek van Zoid Afrika (kykNET) ends with a performance by Zoid, together with her musical guest. Viewers can download the song from iTunes immediately. The current season (3) has already reached 5 no 1 positions on iTunes, following the 10 no 1 positions for RZA Season 2. Both CD`s (1 and 2) have reached gold status in sales and RZA Vol 2 has been on the SA Top 10 iTunes album list since September 2015. Musical guests with who Zoid has collaborated in the series so far include among others Claire Johnston, Vicky Sampson, Emo Adams, Carika Keuzenkamp, Leslie Javan, Koos Kombuis and Juanita du Plessis. All of these tracks are featured on the Volume 3 CD and DVD.

The current series ends on Thursday, April 7th and kykNET has announced a fourth series for July 2016.

The news that Republiek van Zoid Afrika won a SAFTA 2016 for best Talk Show has made Zoid and her team very happy. Zoid says: “We are absolutely delighted! To win a SAFTA is the greatest recognition on a national level in Film and Television. It really is an honor for us. My RZA team put so much love and effort into the production of each episode. But the biggest thanks go to the actual president of Zoid Afrika, our fearless director and producer, Carien Loubser. She is the smartest woman I know and the beloved captain of our circus -ship. I am very proud of everyone involved and I am grateful for the privilege to work with such a fantastic team.”
Carika Keuzenkamp Claire Johnston Emo Adams Juanita du Plessis Karen Zoid Koos Kombuis Leslie Javan Republiek van Zoid Afrika Vicky Sampson