EXCLUSIVE! Chris Chameleon give us the low-down on his new English CD, Firmanent 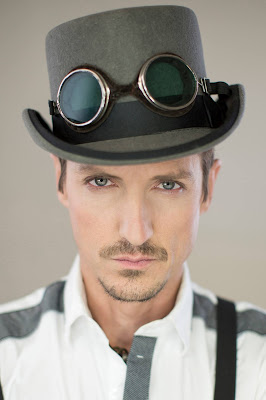 Between touring and recording, singer Chris Chameleon gets personal about his new CD Firmanent and give us a glimpse what is next for him.

Firstly, congratulations with Firmanent charting on iTunes! Must be an amazing feeling?
Yes it is a very pleasant feeling. My job relies on validation & none of it goes to waste.

Why did it take you so long to release a new English CD?
Ja, it is a bit of a long time. I guess my only excuse is that I have been rather busy. Between tours to Europe, the UK, Dubai, Qatar, Australia and West Africa, as well as the 4 Afrikaans albums, three dvd’s and Boo! album I have made in the last 8 years I have battled to make time for a solo English album. I mean to not wait this long before the next one.

From start to finish, how long did it take write and record the album?
A difficult question. ‘Starburst’, the last track, is a song I started writing in 1989; it could never find shape until this album. Other songs, like ‘High', where written in half an hour. A song like 'Don't You Worry' was re-written three times over a period of 3 months & deals with three key events over a period of 40 years. The tracking itself lasted 2 weeks & the mixing about 1 month.

I understand you can speak 4 languages, care to share with my readers which those languages are?
I'm fluent in Afrikaans, English, Dutch & German. I have a reasonable understanding of Zulu but not yet good enough to claim it.

How easy or difficult was it to write the lyrics for the CD? Maybe anyone that inspired you or were your muse?
Songs like ‘Starburst' or 'Don't You Worrry' where very difficult. 'Prickly Pear' was instant. I find I'm becoming ever more particular about accuracy of expression and the value of words, which doesn’t really aid the swift completion of lyric building.

You worked again with Theo Crous. When did the partnership started and why do you think your two gel when it comes to music and recording your music?
We've been working tigether since 2005. ‘Firmament' is our 7th album together. Why? For the same reason that in a world of 7 billion people couples choose each other and stick together: the marriage works. We’re very different people, with different views on life and the world, different interests and pursuits. But when we sit down to make music we understand each other, we communicate much without saying a word. We are a good example of how diverse people unite around the wonder of music.

What the main drive of the theme of the album and why it is titled Firmament?
Thematically the album deals with the awareness I've been feeling regarding my place in the world. ‘Firmament' means 'the universe' which sounds spacious & airy but it also contains the word 'firm' which I rather like.

Tell me the story behind the track Hurt and especially the moving video for the song and what impact you would like the video to have on its viewers?
I was a professional actor before I managed to perform music professionally. Acting has always been an important part of my expression and music videos are an ideal vehicle for my thespian aspirations. I liked the idea of showing a person developing through personages and some personal suffering towards a new sense of self. That’s what the video is about. After I had made the video the Orlando massacre happened. I dedicated the video to the victims of that horrible piece of modern history.

What is next for Chris Chameleon?
I am in studio at the moment, recording my next Afrikaans album, in between touring ‘Firmament’. I will tour Europe again in February and March.
Chris Chameleon