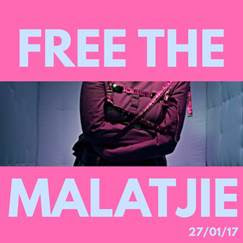 It’s been 18 months since Patty dropped her first break through single ‘Talk” produced by Sketchy Bongo, and now finally she is ready to drop her first full length Album offering

The album is titled "Malatjie" derived from the word Malletjie an original Cape Coloured slang word meaning - someone not quite right in the head. Known to be an innovator Miss Monroe flipped it and made the word her very own, those that choose to be different and not confined by any limitation.

Having the opportunity to mix it up with some very heavy hitting producers, Patty shows an unparalleled diversity in both her soundscape choices and her subject matter. Joined by Chopstix (renowned Nigerian producer) Bushington (Uganda) Sketchy Bongo, long time collaborator Muzi , the Cape Town super Maestro Ameen Harron and upcoming producers Deemo and Psyc’ lets just say, what ever you expecting from this album, its all that, yet not that at all. World renowned photographer Sacha Waldman, the man behind the lens that gave us some of the most iconic hip hop album covers in the last 2 decades, 50 Cent’s Get Rich or Die Trying has brought Malatjie’s lyrical content to life with a true portrayal of color and contrasts. “I had a vision of what I wanted my album to sound, look and feel like, after listening to it once Sacha had IT and delivered above and beyond expectations, super excited for the Malatjies to experience my debut album” - Patty Monroe
Patty Monroe