Taxi Violence to Release Multiple EPs in 2017: The Shape and Form Series 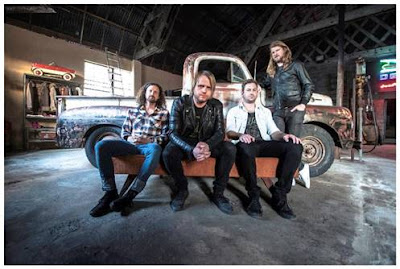 It’s been nearly three years since SA rock legends, TAXI VIOLENCE released their 5th album, Tenfold. But they are hitting 2017 hard and fast – and with a twist.  They intend to release multiple EPs during the course of this year.

“To release music in smaller batches allow us to give our fans new material more regularly. In the end it is still going to come together to form a full album, it will just be released in instalments,” says Rian Zietsman, guitarist for Taxi Violence.

The first offering in this series will be named Shape and Form I.

Shape and Form I, as well as the music video for the first single, Fake It, will be released on 13 February.

Thereafter the single will be available as a free download on the band’s SoundCloud channel.

The artwork will evolve with each EP’s release. “It symbolises progression and evolution. Nothing stays the same, including us and what we do as a band,” says Rian.

The sound of the first instalment of the Shape and Form series is SUPER SIZED to say the least. It is almost inevitable that there will be a natural evolution of sorts. “We have been doing this for a long time and there is a broader change, but within the microcosm of this album, I am sure the sound is going to change from episode to episode,” says Rian.
Taxi Violence