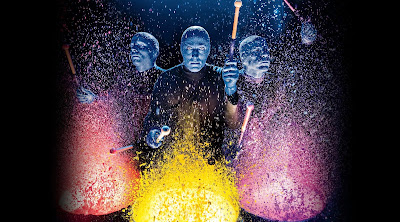 We recently had the opportunity to speak to Blue Man Group member Meridian. Here is what he had to say about the make-up and why they touring South Africa for the first time.

How many Blue Men are their actually in the group? I understand there are more than 3 and they rotate per shows.
We are a cast of 4 on the world tour. Each of the six other Blue Man shows, New York, Boston, Chicago, Las Vegas, Orlando, and Berlin has its own cast of between 4 and 6 Blue Men. It's a diverse and unique group of people!! We move around between shows over time so we get the chance to work with lots of different versions of the character which makes things really fun!

I saw you guys back in Las Vegas in a couple of years ago and wondered why don't you tour South Africa, and here you are. What convinced you to tour South Africa?
We want to share our wonderful show with as many different people in as many places as we can! Blue Man Group is curious about the world around it just like the character is curious about the people around him. We thrive on interaction and the wider we reach out, the richer the inspiration we share in.

How did you guys create the Blue Man group?
To connect. To inspire. To celebrate. To have a great time!!

For people who don't know, what's the concept behind the Blue Man group?
Blue Man Group is about exploring and experiencing the joy of connection and celebration. The three blue guys take the audience on a journey to the best parts of themselves and then we all celebrate that together!!

I’ve always wondered, how long does it take to put the make-up on? And what's the process of getting you ready for stage and outfits?
Our preparations begin about two hours before curtain. We get together with the band and technicians and at through music together and gel our connection with each other. If we can be tight within our group, we can then extend that connection and create it in the audience. The make-up process happens in the final hour before the show starts. We continue our process of play so we can bring that to the stage.

How long does it take to remove the make-up and other blue stuff and costumes after a show?
That's a bit more individual. Some guys are quite skillful at it and can be out in a half hour or so. I'm a bit slower and take an hour sometimes!! Our post show ritual involves a daily review of how we all felt the show went. The band joins us and we discuss what went great, what could've been better (if anything); we celebrate any unexpected moments that resulted in a fun bit of improvisation or spontaneous interaction. There is a special atmosphere of collaboration that takes place starting before the show and continuing until the last moments when we say good night!
Big Concerts Blue Man Group