Diplo Heads To Johannesburg For One Night Only! 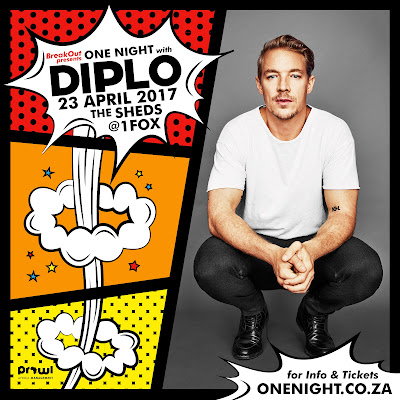 Dance music fans are in for an incredible party as worldwide electronic music heavyweight Diplo heads to Johannesburg on the 23rd of April for ‘One Night with Diplo’, a single evening concert experience taking place at the iconic Fox Junction event venue and The Goodluck Bar.

Diplo has crafted an impressive career as a musician/DJ/producer. The Grammy-winning producer has proven himself to be a ubiquitous cultural figure, consistently bridging high and low, mainstream and underground, with remarkable tact and reverence. 2016 saw Major Lazer’s “Cold Water” featuring Justin Bieber and MØ debut at #1 on the iTunes songs chart in 58 countries worldwide and reach #1 on the U.S. pop radio chart. The song continues to top charts worldwide, with more than 861 million streams to date. Diplo also contributed two songs, “Hold Up” and “All Night,” to Beyoncé’s #1 album Lemonade and received three Grammy nominations in 2016 for Producer of the Year, Best Dance Recording (for Where Are Ü Now with Skrillex and Justin Bieber), and Best Dance/Electronic Album (for Skrillex And Diplo Present Jack Ü).

The collaboration with DJ Snake, “Lean On” featuring MØ became the most successful independently released song of all time after peaking at #1 on the Top 40 chart and being certified platinum by the RIAA. “Lean On” became the most streamed song on Spotify of all time with more than 850 million streams, and only nine months after its release, the corresponding music video for “Lean On” became one of only a handful of videos to reach 1 billion views on YouTube, and is in the Top 10 most watched videos of all time. The double platinum single “Where Are Ü Now,” featuring Justin Bieber from his Jack Ü collaboration with Skrillex, has enjoyed similar success and won the group an MTV European Music Award as well as an American Music Award for Collaboration of the Year.

One Night with Diplo is set to be an unforgettable event as Diplo is joined by a selection of South Africa’s top electronic acts hosted across two stages – The Fox Junction Main Stage and The Goodluck Bar Stage – each setup with a massive lighting and production rig delivering an explosive visual and sonic experience.
Diplo