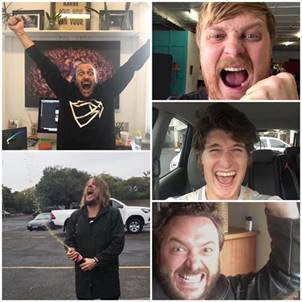 FOKOFPOLISIEKAR launched a crowdfunding campaign on 22 March 2017 via Thundafund to raise money for their first full length album in 11 years.  Their dream goal was to raise R500 000.  This amount was set to cover the album production and printing costs, music videos, marketing expenses and various crowdfunding and other expenses.

The band’s fans reacted with fire and two records were quickly shattered.  According to Thundafund, they raised the most money within 48 hours and also managed to raise the most funds for a music album in South Africa to date. Within only 9 days, Fokofpolisiekar exceeded their dream goal of R500 000 and this amount is still ticking over as fans continue to pledge for an album they clearly would do anything for to get made.

We were all ecstatic on Friday afternoon when we struck R500 000. The campaign kicked off with a bang and the funds just kept coming in. It was quite surreal at times. We are extremely grateful to our fans for their support. We are now more amped than ever to write a killer album,’’ says Francois van Coke.

And the pledges are still rolling in…

On Tuesday morning, 4 April, Fokofpolisiekar received over R570 000 in pledges and there are still 47 days left for people to back the project.

The Fokofpolisiekar band members know that in the current state of the music industry it is very difficult to sell music and for that reason they had many other rewards available as part of this crowdfunding campaign.

“We know that album sales are on an all-time low and that’s one of the reasons why we decided to go the crowdfunding route. To recoup the costs of an album these days is almost impossible, especially for a band that does not produce mainstream music,’’ says Jaco S. Venter.

“It is crazy that album sales make up such a small portion of the money that we have raised. But, don’t get me wrong, we did not expect it to be any different. It just confirms the state of the industry and that we have gone the correct route. Imagine we spent R500 000 on this project and had to recoup that via album sales. We would have been screwed,” says Wynand Myburgh.

‘’We are extremely grateful to our loyal fans and the intense love they have shown towards the band. We did not expect to have raised this much in such a short time. Whether it was through selling T-shirts or signed posters, it was done and we are grateful. Now, let’s go for gold,’’ says Johnny de Ridder.

This fact leads the band to a new target for the crowdfunding campaign.  They will attempt to sell more units of the upcoming album in the next 47 days.  Fokofpolisiekar would love to reach Gold status with the pre-sales of 15 000 units from their Thundafund page. In their 14 year career they have never had a gold record and in South Africa not that many artists achieve this, especially on the day first day of release.

They encourage everyone to take the step and back them by pre-ordering either the digital MP3 album for only R80, the physical CD for only R100 or the vinyl (a limited number is available at R350).

Fokofpolisiekar makes a pledge to their fans