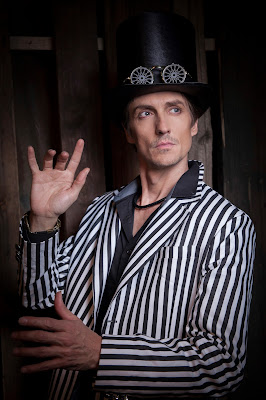 Chris Chameleon is one of the most well-known faces and voices in the SA Music Industry. He is a singer/songwriter/TV and film actor, and performer extraordinaire. Multiple SAMA and Huisgenoot Tempo award-winner, he is one of the few talents who has been successful in both the English and Afrikaans music industries. His two album releases in less than a year proves just that: ‘Firmament’ was released in September 2016 and has been nominated for a SAMA Award 2017 in the Best Alternative Album Category. Chameleon`s new Afrikaans album, ‘Jy en Ek en Ek en Jy’ his first since 2009, was released in May 2017.

Chameleon says that while his Afrikaans work has kept him very busy in recent years, there is still much coming forth from in his English mind. “I feel like a different person in each of the 4 languages I speak fluently and it has the strange consequence that I subsequently express myself in dissimilar ways in each of these languages.”

In asking Chris Chameleon how he managed to release two albums in less than a year, he answers: “It was possible to release two albums, one English and one Afrikaans, in the space of a single year because the one took very a long time and the other a very short time. Work on ‘Jy en Ek en Ek en Jy’ started in 2012. The words happened very quickly back then, but it wouldn’t be until 2016, after the release and recording of ‘Firmament’, that the melodies started taking shape, and that happened rather quickly too. ‘Firmament’, on the other hand, was written and composed in a very short space of time. Some of the songs were written in a half an hour of inspired frenzy. I guess that’s what happens when you have been holding stuff in for too long, it just comes pouring out. As for the release dates, I never really plan these things, when I’m done, I put it out. Otherwise you start questioning yourself and go back fixing the past, obsessing about it, while the future and present pass you by unnoticed. Maybe that’s why we have eyes in the front of our heads; because we are meant to move forward.”

Chameleon explains that the main drive of the theme of the English album and why it is titled Firmament, is that he has reached a phase in his life where he feels less bothered by what people think of him. He says: “It is strange, because I am in the ‘vanity industry’ and one should care. On the one hand it leaves you with the responsibility to not let yourself go. It is easy to neglect your appearance and lose your grasp of protocol when you stop caring what people think. So, I find the need to maintain some element of vigilance in that regard.”

Listen to the catchy single “Can`t Stop Me Loving You” here: https://soundcloud.com/chrischameleon/firmament-06-cant-stop-me-loving-you

This long-awaited Afrikaans album ‘Jy en Ek en Ek en Jy’ was inspired by Chris Chameleon's personal experiences with the search for and experience of love. Chameleon says that the album is a work of emotional disclosure. He speaks in the album about God, his beloved and matters of the heart.  "The album was not made on demand or because it was time or because I had enough songs for a new album. I gave myself full, unrestricted freedom of music and lyrics. I did not disguise my feelings with artistic conjuring or ribbons and bows. The texts were often written in free verse or naked prose, while still finding their form in the regularity of song. This was a process that took a lot of honesty from me. I am humbled by the mystery of love and was inspired to write an album that extended beyond the understanding of my mind.”