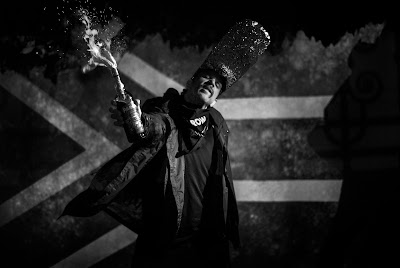 Ladies and gentlemen, hold on to your underwear as JACK PAROW warms up to release probably the best thing to come out of Africa in 2017. He is getting fit for the release of his best album to date, Afrika 4 Beginners and Parow Fest in The Netherlands, by drinking Parow Brandy with his one hand while he braais with his other hand.

Afrika 4 Beginners packs a punch with hard music, rough raps and good times.  The digital release of the album is set for 3rd November and the physical release will land in shops from 10th November 2017.  On 24th November, Parow will embark on the epic Jägermeister presents Boepens Vark Summer Tour.

“My favorite thing in Africa is how we can laugh at ourselves, and that’s what this album is about,” tunes Jack Parow.

The first single and music video from the album, Boepens Vark (Potbelly Pig), will be released on 24th October.  Parow guarantees that this music video, like Africa, is not going to be for sissies and will be sure to upset the tannies.

Not many SA artists can brag they have their own festival in Europe, but Jack Parow secured those bragging rights.  He will celebrate his return to Dutch record label, Top Notch, by hosting his own festival in the Netherlands called Parow Fest, in TivoliVredenburg in Utrecht on 4th November.

Some of his European friends who collaborated with him on his EP, From Parow with Love, will join the party, but Parow is also taking his home slice, Jitsvinger, along for the ride.  It is only about a month and a half to go, but the festival is already ¾ sold out.

Jack Parow says that “it’s mal that I’m actually fortunate enough to be doing my own thing there and the support and feedback has been great, so I’m very amped about Parow Fest, my bru.”
Jack Parow