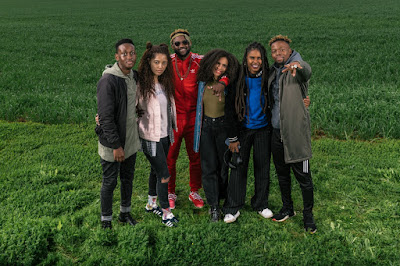 The objective of The Lab is to provide artists with an opportunity to hone their skills, taking their musical vision to the next level, while giving them access to a global audience and an insight into what the music industry entails.
At the Cape Town Creative Lab (CTCL), each performer recorded a new single which will be released to an international audience starting this month. These songs were produced in a world class recording facility and the artists were given access to the finest creative talent including photographers, video directors and stylists – to create all of the marketing assets they would need to support their release.
The CTCL featured daily mentoring sessions with some leading music industry figures. These included legendary producer Nile Rodgers; award-winning songwriter John Ryan (Maroon 5/One Direction/Charlie Puth), Apple Music Up Next artist Mr Eazi; Beats 1’s Kat Wong and Ebro Darden; Alec Boateng (head of A&R Atlantic Records UK); Alex Boateng (head of A&R Island Records UK); Aton Ben-Horin (global Vice President A&R - Warner Music Group); Taponeswa Mavunga (head of Publicity Columbia Records UK), Merck Mercuriadis (Hipgnosis Music) and Kwame Kwaten (Artist Manager and Vice Chairman Music Managers Forum).
The artists – three from South Africa and three from Zimbabwe – also took part in photoshoots, a performance video shoot, artist interviews, whiteboard sessions and media training.
The end result was a life changing experience. The artists all left the CTCL with a great new single, fantastic media packs and an increased understanding on how the music industry works.

The six artists are:


Apple Music will release one single a week from each of the six artists starting on Friday, August 31.
Formed by South African born entrepreneur and music industry veteran Denzyl Feigelson, London-based PLATOON recently launched PLATOON Africa in Cape Town as an artist services platform for independent African artists. Music Business Worldwide referred to PLATOON as “one of the world’s most thought-provoking new music companies”. The company has already enjoyed success with BRIT Award winner Jorja Smith, YEBBA, Nigerian superstars Mr Eazi & Maleek Berry, Billie Eilish and Stefflon Don.
Says Denzyl Feigelson, CEO of PLATOON Africa: “The CTCL is one in a series of labs held around the world to uncover, discover and showcase talent within a region. We started with a long list of performers and narrowed it down to six fantastic artists. We have worked hard on finding the right teams to work with each of them. The week is part of a journey, it doesn’t stop here. The Lab is just the beginning for these performers.”