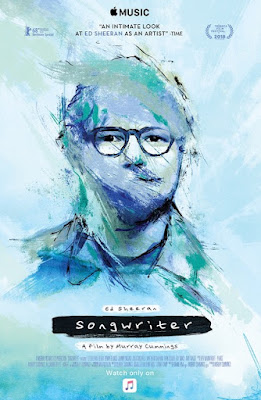 Ed Sheeran’s Songwriter documentary will be available worldwide exclusively on Apple Music on August 28. Fans around the world were treated to a “Perfect” first look of the film directed by Sheeran’s cousin and filmmaker, Murray Cummings, in the latest Apple Music trailer. Following its world premiere at the Berlin Film Festival this year and North American debut at the 2018 Tribeca Film Festival, the film will have a theatrical release in New York on August 17 and Los Angeles on August 24.

"Songwriter gives viewers a unique glimpse into the songwriting process,” said Sheeran. "Murray’s film brilliantly documents the hard work and DNA that goes into creating a song from start to finish."

"I decided to make something different,” said Cummings, on being able to provide an authentic look into Ed’s life and creative process as only family can. “I wasn’t going to show fame. I didn’t want paparazzi, screaming fans or big stadiums. I didn’t want to have sit down interviews because I didn’t want to tell the audience how something came to be, I just wanted to show them. And I wanted the focus to be the songwriting.”

Songwriter is an intimate, beautifully photographed documentation of the creation of Ed Sheeran’s chart-topping album, “Divide.” In the film, the viewer gains insight into the intense, collaborative process that produced some of Sheeran’s biggest hits.

Along the way, Songwriter offers a look back at Sheeran’s childhood, through never before-seen-footage from his family’s archives. Amid a mind-boggling travel schedule that finds him writing on tour buses, at an idyllic Malibu estate, and on one epically luxurious cruise liner, Sheeran works with legendary producer Benny Blanco and musicians such as Amy Wadge, Johnny McDaid, Foy Vance, Ryan Tedder, and Julia Michaels to hone multiple songs at the same time while never missing a beat. Through these lovely, often hilarious interactions, Cummings reveals Sheeran to be a vulnerable, massively talented songwriter, one whose admiration for his collaborators, and theirs for him, is abundantly evident.

Songwriter was produced by Kimmie Kim and executive produced by Stuart Camp and Stefan Demetriou.