The Capitals Request Community Support to Record their EP 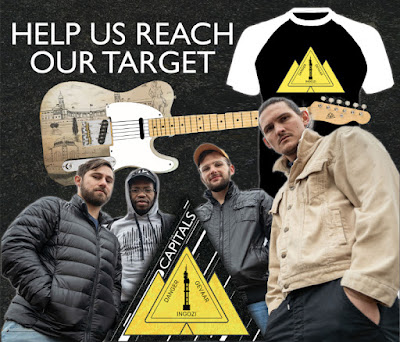 Danger, Gevaar, Ingozi is the forthcoming EP from The Capitals. The Pretoria-based indie band have just launched a widespread Thundafund campaign in order to raise the necessary funds to record.

The album is a collection of everything the band has been through over the last three years, including losing members, gaining new members, a name change, being depressed, being excited and meeting interesting people. Simply put, it is a snapshot of the lives of those who make up The Capitals.

“The songs deal with some serious life topics, but some songs are strictly fun because we don’t take ourselves too seriously,” says frontman Conrad Rudolph. “We want to meet people where they're at and share songs that, by writing them, have carried us through tough times. Our hopes are that people can relate or are perhaps going through similar emotions.”

This album would allow the band to go on tour and provide a platform for people from all walks of life to come together and forget about the craziness of the world's current state for at least one night, dancing together, singing together and to enjoy the one thing that crosses all cultural, religious and language barriers - music.
The amount of money raised will directly impact the number of songs they release.

“We believe in upholding a certain standard and we don't want to sacrifice the quality for quantity,” says Rudolph.

“We've made a lot of sacrifices to pursue music and, despite our day jobs, the cost of recording is beyond our current means. We are not asking for hand outs, but rather if you like our music, please help us record so we can share it with the world. We have created great rewards as a thank you to funders and respect and cherish every penny that comes our way.”