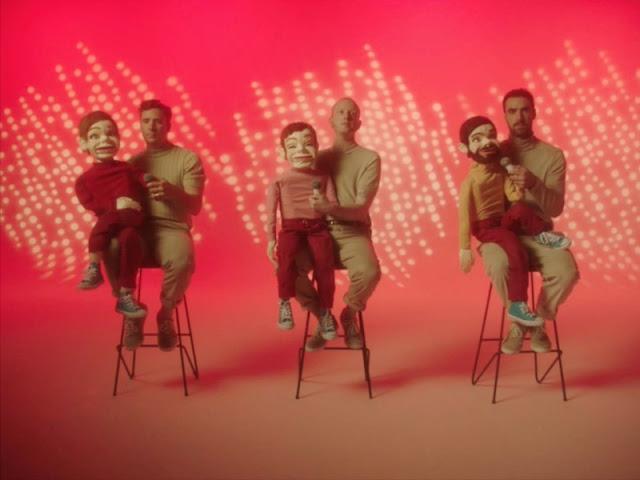 Two Door Cinema Club have shared their new video for ‘Once’, taken from their critically acclaimed and third UK top 5 album, ‘False Alarm’. The video arrives ahead of a UK arena tour commencing this October, including London’s The O2 Arena - full list of dates below.

The video for ‘Once’ sees the Bangor trio cast as deadpan ventriloquists, competing for the limelight with ostentatious dummy versions of themselves, all in a satirical and hedonistic 70s showbiz setting.

‘Once’ music video directors Mathy & Fran said: "It was huge fun making this video! Knowing that the song was about narcissism in the Instagram age, we hit upon the idea of Ventriloquist dummies, which felt strangely relevant to the way we all act on social media - creating personas who speak for us, and live the lives we wish we had.

It was really enjoyable to imagine a world where Alex, Sam and Kevin are completely sidelined in favour of their celebrity dummies, and we had no idea they’d be such good puppeteers…until of course, they get to enact their revenge!"

The band’s first album released in full collaboration with Prolifica Inc, ‘False Alarm’ sees Two Door Cinema Club at their creative peak. Recorded in sessions between London and LA with producer Jacknife Lee (U2, REM, The Killers), it’s an LP that takes the familiar and twists it to startling and stimulating effect. A wide-eyed, culture-encompassing leap forward for the band with a record liable to break, ruin and remould pop in 2019.

Following a landmark headline performance in front of 35,000 people at London’s Community Festival last summer, 2019 festival season has seen Two Door Cinema Club complete outstanding performances at Radio 1’s Big Weekend and on Glastonbury’s Other Stage. Elsewhere, headline slots at Tramlines, Y Not and Truck Festival saw DIY Magazine confirm, "they’ve had the crowd-pleasing hits for years, but now the trio have the stagecraft and the sparkle, too''.
Two Door Cinema Club