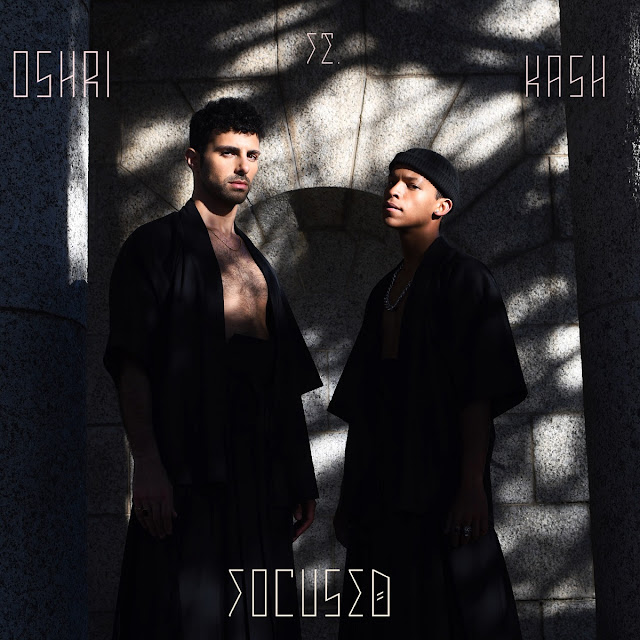 South Africa’s very own resident Oshri, who is also based in Los Angeles, is more Focused than ever to make it big internationally, with him currently focusing on a variety of projects in South Africa, LA and Israel in order to achieve this, before taking on the rest of the world. It is therefore no wonder that his latest single which was just released - a collaboration with local artist Kash - is called just that…Focused.

The way Focused was written is as fascinating as the song itself. As a star on the brink of breaking through all the barriers to make it as one of the top names in the industry internationally, Oshri had two teams working simultaneously on songs in two different studios, and he would continuously move between the two. He adds: “The group working on Focused already had a killer track going and asked me about where I was at as a person. I told them that I just felt incredibly focused and have goals I want to achieve and that’s all I care about. Prior to this I was spending a lot of time with friends and going out a lot in order to network, as that was the impression of Los Angeles that others gave me of how one would go about in order to make it. Later on I realised that this was just complete nonsense, and I have to make it happen myself and not depend on meeting the ‘right people’. So I became very focused, as it’s so easy to become distracted and get involved in a lot of things, which takes up all your time and attention, resulting in you not really achieving anything.”

But what is the message behind Focused for Oshri’s existing and growing fanbase? He replies: “No matter what you want to achieve in your own life, focus on your dreams and do so without getting off course. It might appear to others that you are selfish and doing your own thing, but you can’t be available to everyone all the time at the cost of yourself and your ideals. At the end of the day it’s your life and you have to live with what you achieved and want out of this one opportunity you’re given while alive. And the only way to get it, is to remain focused.”

Based on Oshri being so focused is exactly what sets this song apart from his previous releases, as he shares. “The song is far more aggressive that anything I’ve ever released and that’s where I’m at in life as I’m just going for what I believe in and what I know is right and I’m not going to let anyone stop me.” Stylistically, Oshri is showcasing more Middle Eastern flavours with Focused and even incorporating some traditional Hebrew words in the bridge of the song, where he is basically singing about being focused in ancient Hebrew, which is just one of the many highlights of the song fans will experience.

A very unexpected collaboration with Kash

Collaborating with Kash on the song, with two voices that could not possibly complement each other better, one might expect that it was planned ahead of time for the two talented artists to work together on this soon to be hit. But not so, as Oshri reveals: “My publisher, John Fishlock, played me a couple of tracks that Kash wrote. I liked his urban style and he was initially only brought in as a songwriter. But he had these great ideas and then he went in and recorded this brilliant verse. I was so blown away by what I heard that I couldn’t possibly get myself not to keep him on the track. In fact, what you hear on the song, is that very same original recording Kash did during these writing sessions.”

Working with Kash was a mind-blowing experience for Oshri, who states: “On social media he looks like this really tough and rough guy, but in real life he is so nice and sweet and just the best guy ever. He was so grateful for everything and surprisingly very shy too. When it comes to songwriting, you need to have that connection and chemistry with someone that can’t be forced, but just magically happens sometimes no matter how different you are from one another as individuals. And that’s what happend with Kash and I. It was an unexpected, but great experience!, and the end result showcases it beautifully”

A music video shoot inspired at the very last minute

It was during a photo shoot that Oshri and Kash did with some top photographers in incredible, exotic locations around Cape Town, including some sets that looks like the duo are starring in a multi-million blockbuster film, that the team decided there and then to shoot a music video as well. “We all called in friends that we knew were at the top of their game to be part of it, which was filmed by Mike Stephens, Mousa Sow and Danielle Gabriel.”

“The scenes where Kash and I are battling it out through martial arts is pretty much a metaphor for the fight that we as artists face in our own lives. Although it appears in the music video that the martial arts’ shots must have taken weeks to choreograph, it actually just happened on the spot and was complete free-styling. This experience is actually typically me - I like to make things happen immediately when inspiration hits,” Oshri passionately recalls.

As a child, Oshri was trained extensively in martial arts, specifically Krav Maga, which is clearly why it appears so professional and rehearsed in the final video, which can be viewed HERE.

Apart from some future hits already completed and ready to be released, Oshri is also working on a live show that he says is going to be unlike anything people will expect or have experienced before. He is however very secretive currently about what it will all entail, although his enthusiasm about it is unmistakable, until the official release is made soon. And yes, a South African tour is also in the pipeline for Oshri. But for now, fans will have to wait patiently and in the meantime enjoy releases like Focused which puts Oshri on an entire new level than what he has ever been before.

With his close ties to South Africa, Oshri signed with Gallo Record Company during the last couple of months. “It was just the best decision ever. I fell in love with the head of Gallo, Rob Cowling, as a person, on top of the fact that he has one of the best business and creative minds in the industry. He is willing to take risks and not follow the trends, but actually create them. The Gallo team together with my team from Ian Bredenkamp Media are working closely together as one and taking things to a much greater scale with what they are planning. Big things are in the pipeline and I’m as excited as I’m focused,” Oshri enthuses.

Focused the single, which will appear on an EP with the same name set to be released early next year, is now available on all popular digital platforms - http://africori.to/oshrifocused.
Kash Oshri